To solve this, we just add each corresponding element entries on both matrices to produce the resulting matrix (which has the same dimensions as the ones it comes from). And so, the result looks like: This first example problem shows us an important property of the zero matrix: When a zero matrix is either added or subtracted from another matrix with the same dimensions, that matrix remains unchanged and is equal to the result of the operation.
Example 2
To proceed with our next example, we work on a subtraction of matrices where a zero matrix is being subtracted to another matrix of equal size. The operation follows the same principles as the addition in example 1. Thus, solving this operation we obtain: As we had mentioned in our lesson about adding and subtracting matrices, although matrix addition is commutative (you can change the order of the matrices and the result won't change), matrix subtraction is not, and it is clearly visible on this example.
If you were to have had the zero matrix on the right side of the minus sign on equation 6, then the result would have been equal to the other matrix involved in the operation. But since the zero matrix was first, the result happens to be the negative of the non-zero matrix from the operation.
Example 3
For this example, we have the addition of the next two following matrices: Notice something in particular from the matrices above? They are the negative matrix of one another, or in other words, if you take the first matrix and multiply it by negative one, you would obtain the second matrix. Therefore, this particular operation is equivalent to subtract a matrix from itself. To show this, let us define the first matrix as A: Then we write down the equivalent operation we have explained a moment ago: Notice the scalar multiplication of minus one times A has been simplified to just write it down as a subtraction of the two matrices, which by now, are both A, and so what we have in equation 10 could be just written as: A - A which has obviously a result of zero. But since we are not talking about just numbers here, but matrices, the zero result would have to be an array of the same dimensions as A, and so: Notice that the subindexes in the right hand side of the equation denote the dimensions of the zero matrix, which mean that the resulting zero matrix must have the "m of A" (the same amount of rows as A) and the "N of A" (the same amount of columns as A). Let us obtain the result in two different ways: the original matrix addition shown in equation 8 and the matrix subtraction found at the end of equation 10, to show how we will obtain the same result: a zero matrix, to prove equation 11. The conclusion from this problem is that, whenever you subtract a matrix from itself, you will obtain a zero matrix with the same dimensions as your original matrices. Example 4
On this example we will see the subtraction of two equal matrices which happen to be column vectors. Here, the principle explained during the past exercise is used again: When subtracting two equal matrices (which in this case happen to be two column vectors since the matrices are composed of only one column each), the result is a zero matrix the same size as the original ones: Example 5
Compute the following scalar multiplication of a matrix: On this particular case it should be clear the result will be zero since anything you multiply by zero will result in a zero. The interesting part here comes from the fact that you are multiplying a matrix, and so, each element will be multiplied by the scalar outside in this case zero, and what will happen is that, instead of obtaining simply a zero as a result, this multiplication will produce a matrix in which all of its elements are zero, and so, the result is a zero matrix: Which can also be written as: Example 6
Compute the next scalar multiplication containing a zero matrix Just as with past problems, we can intuitively write down the answer as a zero matrix, since every element in the matrix is a zero, it doesn't matter if you multiply any other scalar to them, the result will always be zero in each case. To expand the operation, here is how it goes: Example 7
Let us change the mode of our problems, now you are given the matrices shown below: With that in mind, are the following matrix equations true? If not, correct them.
Cases e) and f) bring about an important conclusion: matrix multiplication is not commutative unless one of the two matrices is a zero matrix. No matter in which order you multiply the elements of each matrix, one of them has all zero elements producing multiplications which all result in a zero.
As mentioned before, the zero matrix happens to be a very concrete concept so there is truly not much more to say about it for this lesson, still, that doesn't mean it will not be used in multiple areas of linear algebra. Just as the number zero in mathematics, the zero matrix provides us a representation of null space which we can still caracterize, in other words, it may contain null elements but its qualities remain there to be used at our convenience with other matrices.
To finalize our lesson, we will just provide two extra links in case you want to visit them and look at how they define the zero matrix and provide a simple example of an addition with a zero matrix. That is it for today, see you in our next lesson!
Note
A zero matrix is a matrix (usually called O) where all the entries are zero. For example, 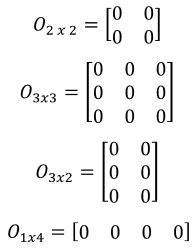