And this is it, see you in our next lesson!
We can add and subtract matrices only if the dimensions of the matrices are the same. For example, 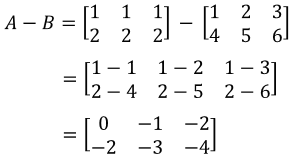