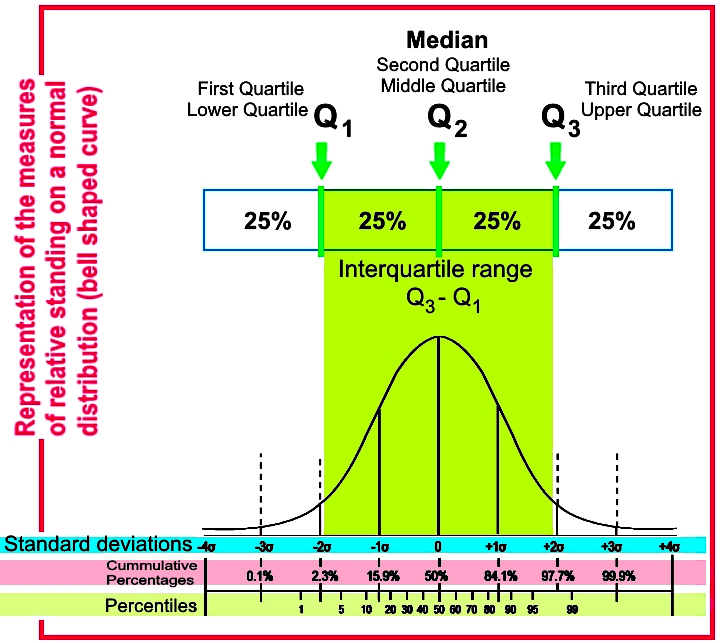 Figure 1: Representation of the measures of relative standing on a normal distribution

What is a z score?


The z score let us know of how far away a data point is from the mean of its set, in units of the standard deviation of the set. In other words, once you have calculated the mean of a data set and its distribution, you can calculate how many of these standard deviations separate each particular data point from the mean, that is the z score for each value.

• What does z score mean

The z score definition above may seem too simple but the process is quite remarkable, let us expand on this. The z score, also called the standard score or the standardized score, is used to re-scale a data set and its distribution so we can meaningfully compare it with others. What does that mean? Imagine you are collecting statistical data from the people in the city of Richmond by checking on records done by official government agencies or specialized companies. After some research you obtain data from the ages of the city population, the rate of car ownership, information on how many of them have a professional degree and how many own a house. You have all of these sets of data (which we assume are normally distributed), for which you can create frequency distributions and histograms to compare them, and after you do, you arrive to an issue: No matter how well done are your distribution graphs, you cannot accurately compare them because the samples of the population used in each statistical data set are different, and so, the proportions do not fit with one or the other. Here is where normalization and the z-score come to play a role! Calculating the z score of the values in each data set you can produce re-scaled distributions that can literally be overlapped on each other for comparison.

The process can get quite complicated, so let us first start with the basic calculation for the z score, and once we have learned more about the normal distribution we can come back to the use of the z score for higher difficulty, unrelated data set, comparisons.

• How to calculate a z score

In order to calculate the z score of a population we follow the next formula:

Equation 1 is also called the standard score formula and it represents the mathematical z-score definition.
Accordingly, the z score equation for a sample is defined as:

Let us look at the usage of the z score in the next example:

We need to calculate the z-score for the grades of Charlie and Daisy and see who (if any) was among the best on their classes. We have the following information:

Therefore, using the z score formula from equation 1, we calculate the z scores for each student and find:

So after we have gotten the corresponding z scores, how do we know which of their grades is better? Well, the results from equation 3 tell us that Charlie got a test mark 2 standard deviations higher than the mean of the class, while Daisy got a mark that is 3 standard deviations higher than the mean in her class. Therefore, proportionally speaking, Daisy did better within her class in comparison to Charlie.

NOTICE: Daisy did better WITHIN her class, in comparison to how Charide did WITHIN his class; thus, the z score calculation let us know how they proportionately did within their classes (meaning that Daisy was probably among the people with the highest marks for that test in her class). This does not mean that Charlies grade is absolutely worse than Daisys. If taken as an absolute value only, Charlie still got a higher mark compared to Daisy; still, proportionally speaking, it appears that people in Charlies class got higher marks too and so he wasnt among the very highest marks in his class.

What is a percentile?


Now let us talk about another measure of relative standing, the percentile. Percentiles indicate the percentage of data outcomes in a set which fall under a certain value.

• How do percentiles work

• How to calculate percentiles

In order to calculate the percentile of a certain value X from the data set we follow the next equation:

Let us look at an example so you see the process of finding percentiles in action:

So we have that Sidney scored in the 50th percentile (or above the 50%).
Now to answer the second question of this problem, let see what is Billys mark if he is in the 70th percentile: Using the percentile equation (equation 4) we solve for the number of data points less than X so we can then go and check back which score meets this condition in the set:

Therefore, there are 7 data values in the set before Billys score, which means Billy got a 83% in his Biology course.

The middle 50% of the data in the data set and its proper distribution comprises the interval named the interquartile range, which is equal to subtracting the first quartile from the third quartile.
Do not confuse a quartile with a quarter, while each quarter refers to the whole fraction of the data representing 25% of it, the quartile is the point that marks the division between one quarter and the other.

• How to calculate quartiles


Let us explain the method to calculate quartiles with the next example:

Find the quartiles for each data set:

The media represents the second (or middle) quartile, for this case Q2​=7.
Then we just obtain the median for each half of data values on the left and right of 7, and so:

Since the data set has an even amount of values, we obtain the median by averaging the two center values on the set:

Therefore Q2​=7.5.
And then we find the median for the range of values on each half of the data set:

And so Q2​=8.
Now we get the median of each half of the data set at each side of the median we just got:

Calculate the first and third quartiles:

Therefore, the steps for finding quartiles are:

The process has been summarized in the next diagram for each type of data you might found: 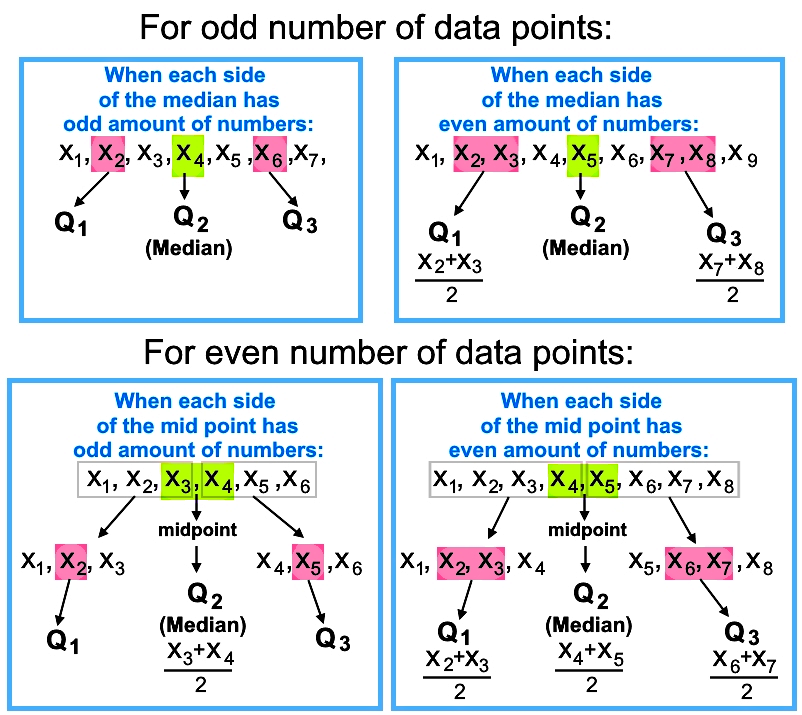 In summary, the measures of relative standing are those point marks or calculations that allow you to see where a particular data value is within the complete data set (or its proper distribution); the z-score will tell you how many standard deviations is a certain value away from the mean (either above or below it), the percentiles will tell you in which of the 99 points that divide the data set into 100 equal parts is your data point located and even provide you with a rank on how much data is above or below it, and the quartiles will do the same as the percentiles but dividing the data in four equal parts only.

Now, we recommend you to take a look at the next links so you can continue your independent studies in what you learned today. This lesson covers the most important measure of relative standing: the z-score, this short article contains an explanation of what is percentile rank and how is it different from percentage, and this page talks about other locations in a distribution, where they describe not only quartiles but deciles too! We suggest you to take a look to them so you can see more example problems.

This is it for the lesson of today, see you in the next one!
⋅ zx​: z-score, a measure of how many standard deviations a data item x is from the mean.

z-score allows comparison of the variation in different populations/samples.

⋅ Quartiles: values that divide the data set into quarters.

⋅ InterQuartile Range (IQR): represents the middle 50% of the data set.

⋅ Percentiles: indicates what percentage of the data falls below a certain value

⋅ Outliers: an outlier is a data point which lies an abnormal distance from all other data points.