The probability of a specific value of a random variable x to occur is mathematically defined as:

The most common types of continuous probability distributions are:
On this lesson we will focus on the first one.

What is a normal distribution? 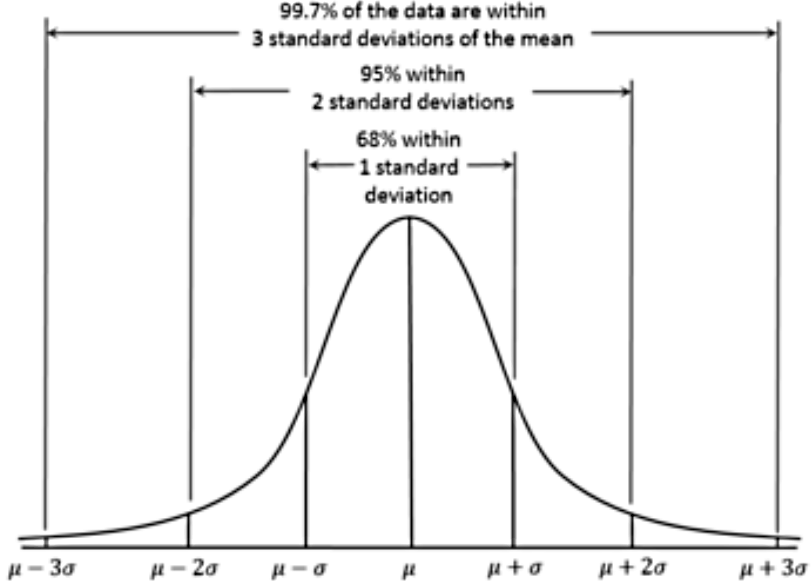 
The main characteristics of a normal probability distribution are:


Figure 2: How the mean and standard deviation define a normal distribution

How is this useful? as we said before, if researchers are studying different characteristics from a population, all of these data distributions will have different means and standard deviations, making the comparison of the values throughout the different normal probability distributions very difficult.
Why? because you would need to use calculus (integration) to calculate the probability of each piece interval in each distribution for each set of data, where their scales are different. Even when data distributions come from the same population, the difference in their mean and standard deviation complicates such comparisons. Therefore, what we can do is to re-scale each distribution into a standard normal one and then compare them.

As you can see, the standard normal distribution serves to estimate the probability of events from a normal distribution and to compare more than one of these distributions with one another; thus, allowing researchers of large populations to obtain a more complete picture of the population, and making the process faster and efficient.
Next we present the z-table for you to use it in our example problems in the next section:

Reading and using the Z Table, find the following:

Finding Probabilities from Z-Scores
Answer the following questions based on the properties of standard normal distribution.

Finding Z-Scores from Areas
Answer the following questions based on the properties of standard normal distribution. ***Notice that we will only include the method by the Z table, but you can watch our videos for this topic where you will find the calculation using the calculator explained.

We have arrived to the end of our lesson.
Before you go, we recommend you to take a look at these materials on the normal (Gaussian) distribution. On our next lesson, we will finally talk about the relationship of the z-scores and random continuous variables, so stay tune and enjoy!
2
videos
remaining today
5
practice questions
remaining today