Notation for a Limit of 2 Variable Functions Suppose we want to take the limit of x→a and y→b of f(x,y). Then we write this notation as:

In a sense, we are trying to approach to the point (a,b) in the function f(x,y) without being at that point.

Limit of Continuous 2 Variable Functions
A function f(x,y) is continuous at (a,b), then:

In other words, if the function is continuous at (a,b), then plug in x=a and y=b to evaluate the limit!

Ways to see if it is continuous at (a,b):
Visualizing the Limit
There are many paths to approaching a specific point. For example, look at this graph: 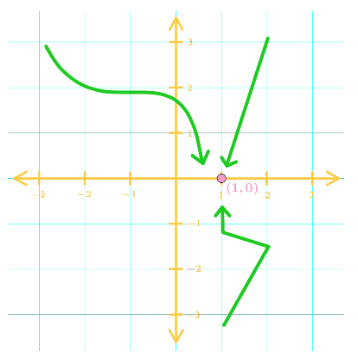 There are an infinite number of paths into approaching the point (1,0).
One thing to note: If all paths lead to the same value, then the limit is equal to that value.

What if the Function is Discontinuous at (a,b)?
You want to take different paths to (a,b) and see if the limits are different. For example, one path can be y=x2 and the other path can be y=x. If evaluating these paths with limits give different values, then the limit does not exist! We will show an example of this in the video.