In this section, we will learn how to approximate unknown values of a function given known values using Linear Approximation. Linear Approximation has another name as Tangent Line Approximation because what we are really working with is the idea of local linearity, which means that if we zoom in really closely on a point along a curve, we will see a tiny line segment that has a slope equivalent to the slope of the tangent line at that point.

Let's say that one day you forgot a calculator and you really want to find how what the square root of 2 is. How would we find out without a calculator? We can use linear approximation!

Linearization of a function

where L(x) is the equation of the tangent line at point a.

How is this useful to us? Well, we can actually use this equation to approximate values of the function near point a. Take a look at this graph.

Now don't we take a look at a few examples of finding the linearization of a function and then look at how to use linear approximation!

Find the linearization of L(x) of the function at a

Let's say that we want to find the linearization of the function at point a=4.

To find the linearization L(x), recall that

Notice that in order to calculate L(x), we need f(a), f'(a) and a. Afterwards, were going to have to plug in everything in the formula to find L(x). Hence, I created these steps:

How to do linear approximation

Remember earlier we said that we could use the equation of the tangent line to approximate values of the function near a? Let's try this with the linearization we found earlier. Recall that

for points near x=4. We can change this into a linear approximation for f(x) by saying that:

Now, let's say I want to approximate f(4.04). If you were to plug this into the original function, then you would get 4.04​ . This would be really hard to compute without a calculator. However, using linear approximation, we can say that

Now so far, these questions gave us a function and a point to work with. What if none of these were given at all? What if the question only tells us to estimate a number?

Use Linear approximation to estimate a number

Suppose we want to estimate 10​. How would we do it? We would need to use the linear approximation

but we don't even have a function and a point to work with. This means we have to make them ourselves. This leads us to do the following steps:

If you want more practice problems about linear approximation, then I recommend you look at this link here.

We know that linear approximation is just an estimation of the function's value at a specified point. However, how do we know that if our estimation is an overestimate or an underestimate? We calculate the second derivative and look at the concavity.

Concave up vs Concave down

If the second derivative of the function is greater than 0 for values near a, then the function is concave up. This means that our approximation will be an underestimate. In other words,

Why? Let's take a look at this graph.

Now if the second derivative of the function is less than 0 for values near a, then the function is concave down. This means that our approximation will be an overestimate. In other words,

Again, why? Let's take a look at another graph.

So if you ever need to see if your value is an underestimation or an overestimation, make sure you follow these steps:

Let's take a look at an example:

where dy and dx are differentials, and f'(x) is the derivative of f in terms of x. Since we are dealing with very small changes in x and y, then we are going to use the fact that:

However, most of the questions we do involve setting

So using these facts will lead us to have:

This approximation is very useful when approximating the change of y. Keep in mind back then they didn't have calculators, so this is the best approximation they could get for functions with square roots or natural logs.

Most of the time you will have to look for f'(x) and Δx yourself. In other words, follow these steps to approximate Δy!

Let's look at an example of using this approximation:

However, most of the time we want to estimate a value of the function, and not the change of the value. Hence we will add both sides of the equation by y, which gives us:

which is the same as:

This equation is a bit hard to read, so we are going to rearrange it even more. Let's try to get rid of y and Δy. Notice that Δy+ y is basically the same as finding the value of the function at Δx+x. In other words,

Hence substituting this in our approximation above will give us:

where f(Δx+x) is value we are trying to estimate. How do we use this formula? I recommend following these steps:

Let's use these steps for the following question.

Question 5: Use differentials to approximate 10​.

One interesting thing to note is that linear approximation and differentials both give the same result for 10​.

If you want to learn more about differentials, click this link:

Recall that the linear approximation formula is:

See that we can rearrange the formula so that:

Realize that the approximation becomes more and more accurate as we pick x values that are closer to a. In other words if we take the limit as x→a, then they will equal. So

Now we are going to put this aside and use it later, and actually look at l'hopital's rule. We are going to assume a couple things here. Suppose that f(x) and g(x) are continuously differentiable at a real number a, f(a)=g(a)=0, and g'(a) = 0. Then,

Now notice that we can apply the formula that we derived earlier right here. So now

Now instead of writing f'(a) and g'(a), we can apply limits as x→a (because we know f and g are differentiable). So

Hence, we just showed that:

When to use l'hopital's rule

Let's take a look at a few examples using these steps.

Now that question was a little bit easy, so why don't we take a look at something that is a bit harder. 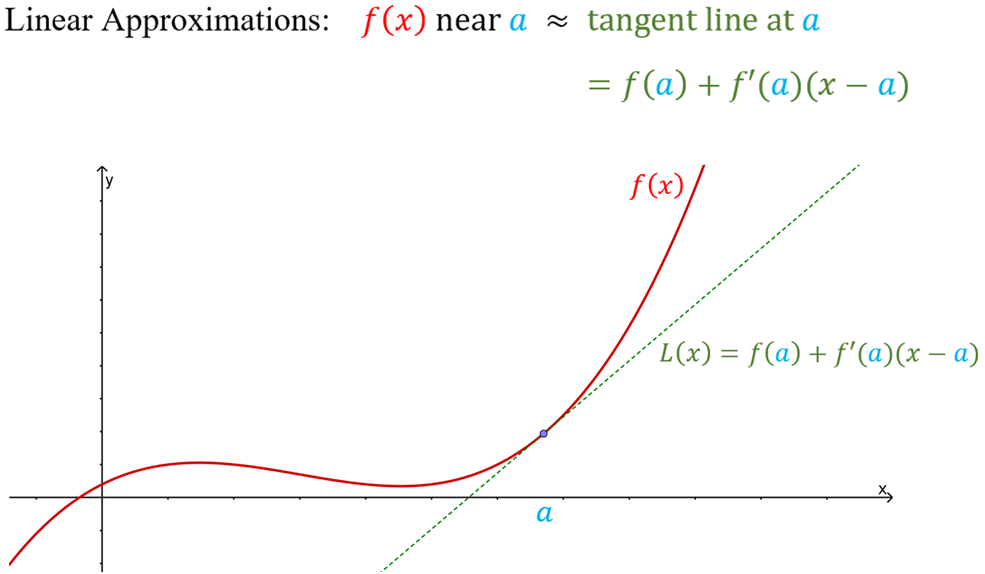