Having learnt about bivariate data, scatter plots and correlation in our last section, our topic of today will be focused on using all three of these concepts to study a method for estimation of data called regression analysis.

What is regression analysis


Remember that correlation is the relationship between the two variables in a bivariate data set which depends on the behaviour shown by the variables and their probable dependency on one another? Well, regression analysis makes use of this by looking into the dependency of one variable with the other and the produced effect on the scatter plot where these two variables are represented; therefore, scatter plots, correlation and regression analysis go hand in hand and we will be using them throughout this lesson.

You may be wondering: how does regression analysis work then? Very simple! Having a measured data set, the values in the set are used to make a calculation of the best estimation of data points that are not present in our data set by looking at the proportion of one variable with the other, or at its behaviour with respect to the other. This way, regression analysis can estimate future values (those which are not present in the set because they are in the future timeline of the data, not only in a timeframe but in a numerical way too), past data values, or even values within the data points we already have. 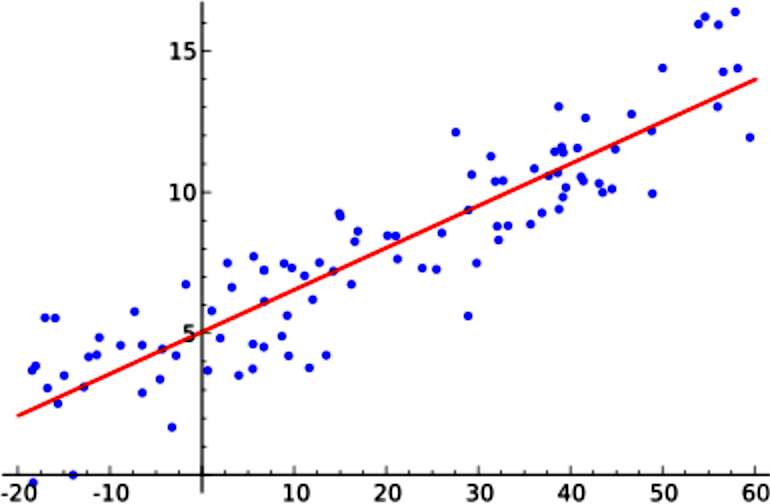 Figure 1 shows a graph for a linear regression analysis, notice how the data points in the scatter plot are in locations that allow us to see there is a positive correlation between them (as values increase for one variable, they increase for the other too).

How to do regression analysis

Using the data for regression analysis of the time spent doing homework correlated with the final grade of a student in a class, which is provided in the table below, work through parts a, b and c of this example problem.

a) Plot the following bivariate data as a scatter plot, with the time spent on homework on the x-axis.


We found the line of best fit by using the two data points of (8,80) and (15,87), with that, we can obtain the equation for the line using the formula for the slope of the line:

Equation for the line →y=mx+b

And so the equation for the line is:

y=x+72
Equation 1: Equation for the best fit line obtained in the graph

c) Using the best fit line found in the previous part, estimate what mark a student would achieve in this class if they spent 14 hours on homework

By looking at the graph we can see that a student spending 14 hours doing homework would achieve an approximate grade of 86%. We confirm this by using the equation for the best fit line seen above:

How to interpret regression analysis


In order to practice the interpretation of a graph once we have applied regression analysis, let us take a look at the next examples:


study was done on 17 factory workers on their coffee consumption and how many boxes they were able to move per hour. The results of this study are given in the graph below: 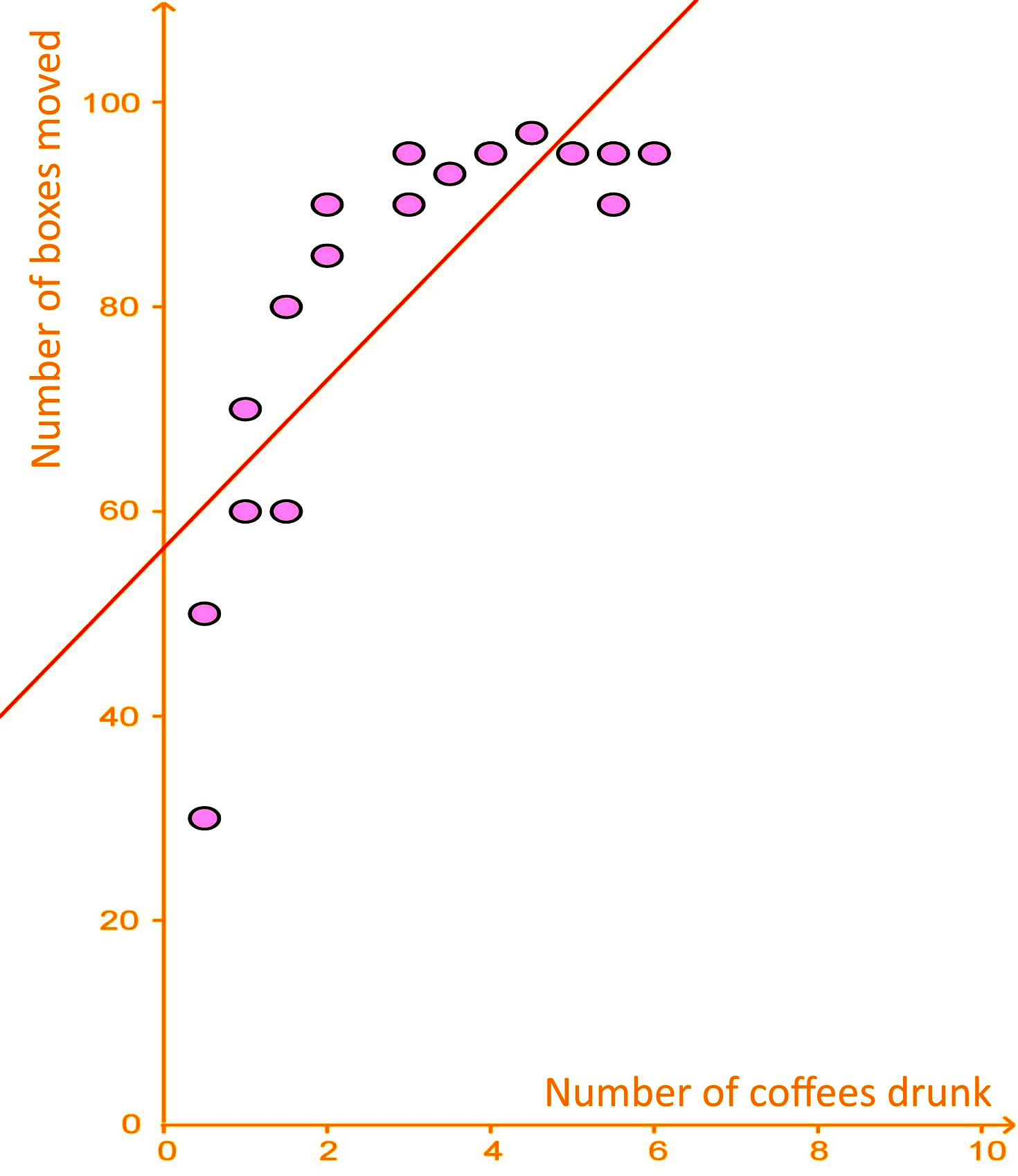 a) Using the trend line, extrapolate how many boxes would be moved if a worker were to drink 15 coffees?

To answer this question we just use the equation for the best fit line, which is the equation provided for the trend line above: y=8x+56.
For this case x=15, therefore: y=8(15)+56=176.
So, according to this regression analysis example a worker drinking 15 coffees would move 176 boxes per hour, but DONT EVER TRY THIS!
Remember this is just a hypothetical scenario, NO ONE should drink that much coffee in a day, less in an hour, is dangerous!

b) Using the trend line, extrapolate how many boxes would be moved if a worker were to drink 15 coffees?
By looking at the data points in the graph, it seems the extrapolation is not a good estimate. The reason for it is that although the data points have a certain tendency to increase in both variables values at the same time, the increase does not seem to follow the same proportional pattern when comparing values from one variable to the other (that is why the data points do not show a straight line tendency, they look more like a cane shape). To see this take a look at the figure below: 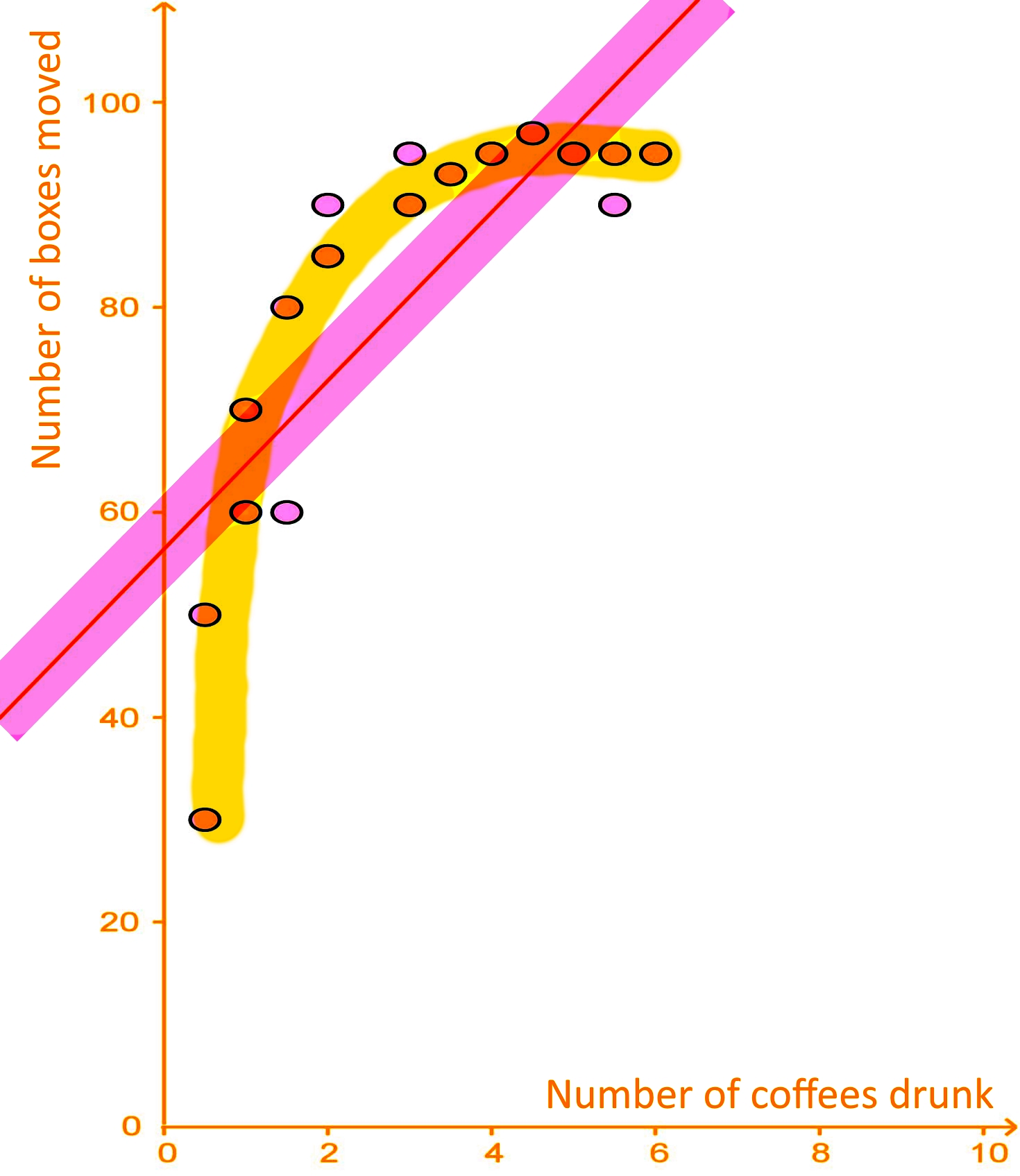 
A study took a sample of 14 cars and found the age of each car and the amount of money that each car is worth. A best fit line is given by the equation y=−2100x+27500 , where y is the worth of the car in dollars and x is the age of the car in years. 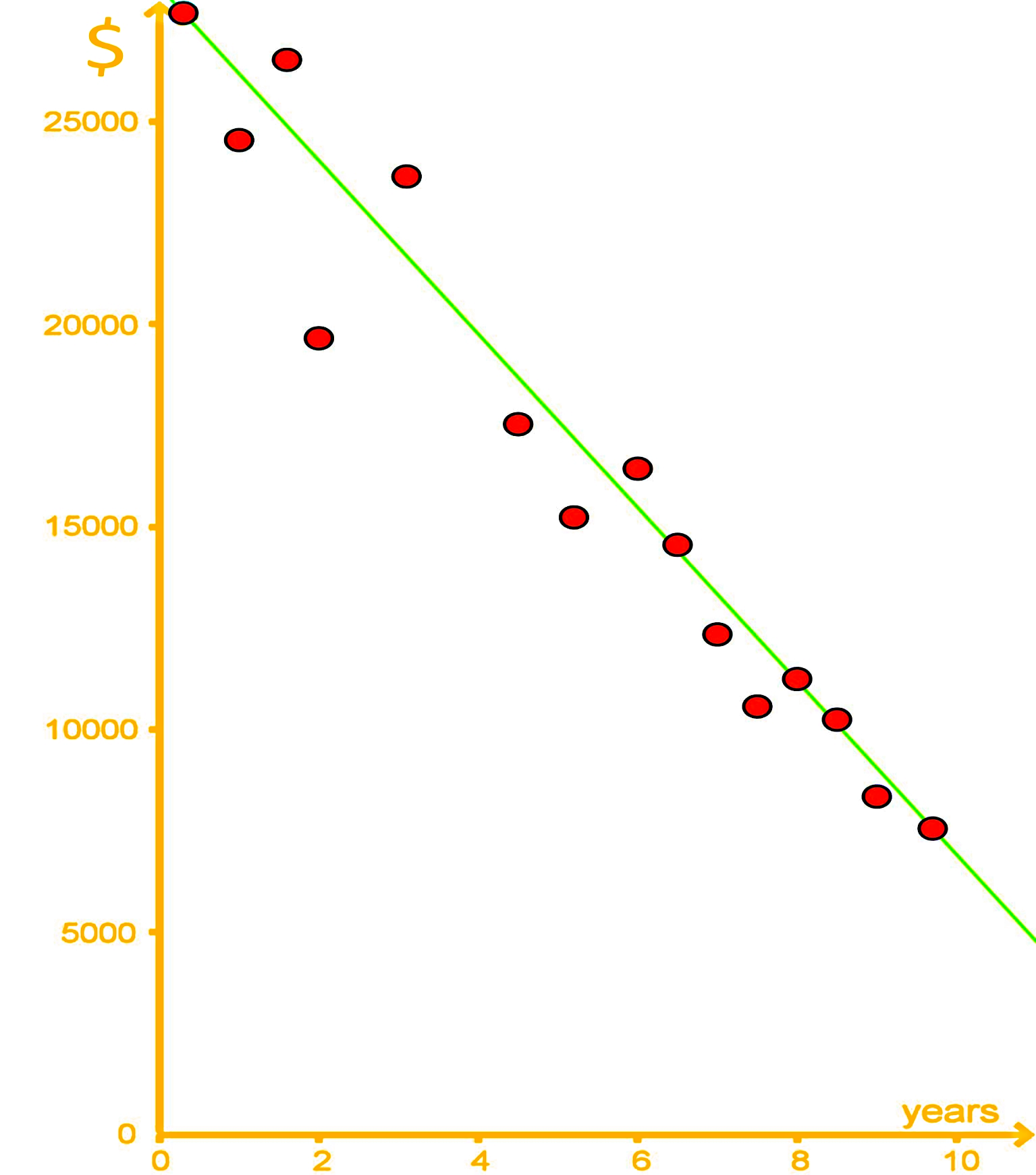 Figure 7: Regression analysis for the worth of a car ($) vs its age (in years)

a) Using the best fit line interpolate what a car might be worth if it was 5 years old?

c) Using extrapolation what might a car be worth if it was 15 years old? Whats wrong with this answer?
Once more, we use the equation of the best fit line to work the calculation:
When x=15, then: y=−2100(15)+27500=−4000.
According to this regression analysis, the net worth of an 11 year old car should be -$4,000.
So what is wrong with this answer? Well, the value of the car cannot be negative! This extrapolation decreases its accuracy as you continue to plot values because the real value would not continue in a linear tendency, just take a look at the graph below: 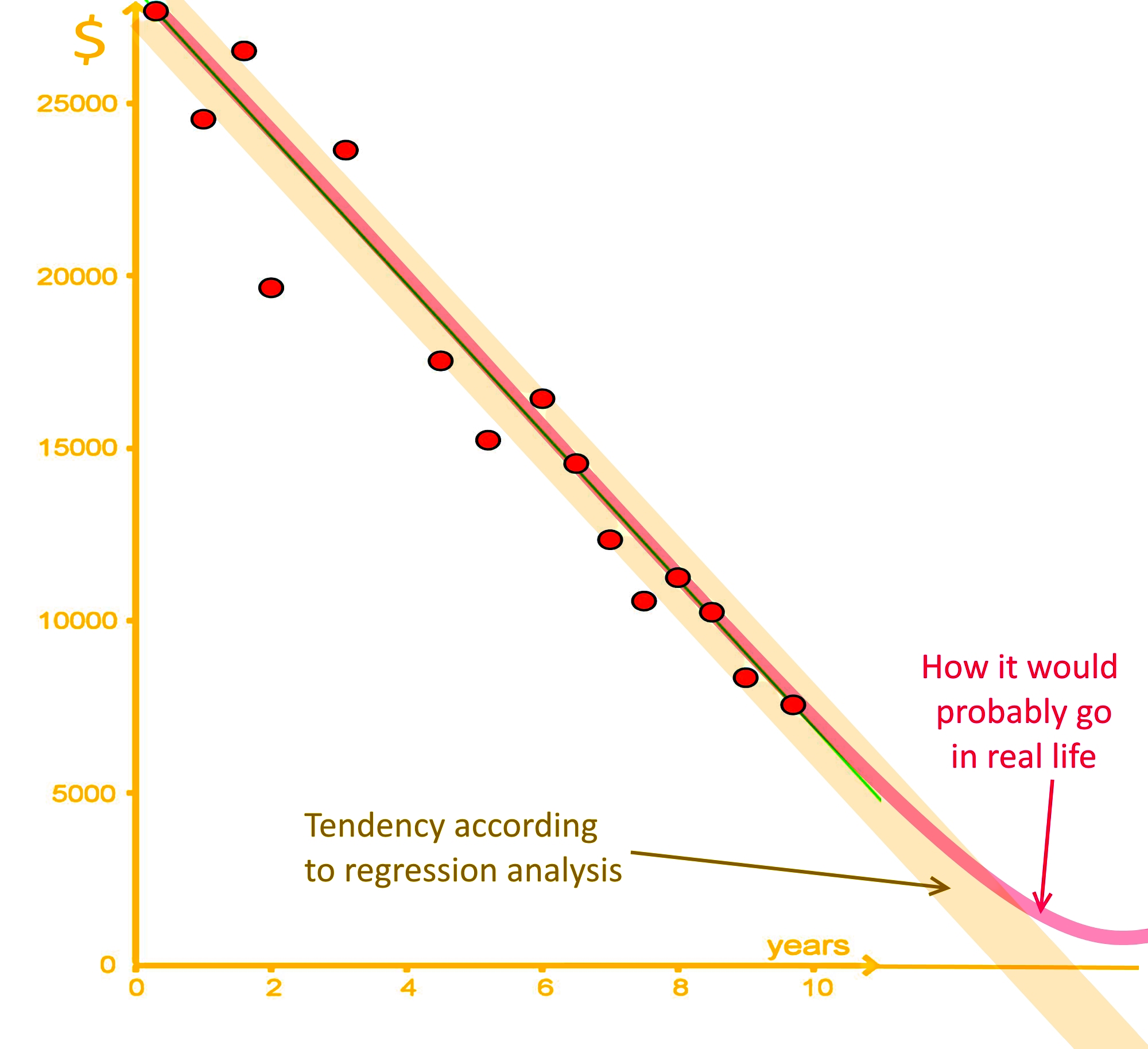 Figure 8: Regression analysis for the worth of a car ($) vs its age (in years)

Although someone would argue that a negative number could, in a sense, be correct because as it ages, a car will make you spend more in repairs than what it is worth; we are only talking about the cars worth as a vehicle here (not the infinite variables that come from the owner and real life); therefore, a car is still worth something as it ages and you could sell it (even if its as scrap material haha!). Thus, this extrapolation result of -$4,000 is not a good estimate.

To end this lesson, here are a few link recommendations for you: On this introduction to correlation and regression analysis you will see how this and our past lesson come together once more, pay close attention to the different examples provided; furthermore, this article covers an example of the multivariate regression analysis, which is an expansion of what we have seen so far.