Before we look into the solution method for these equations, let us first differentiate between a homogeneous and a non-homogeneous second order differential equation.

By definition, a homogeneous equation (homogeneous differential equation) is that which consists only on terms containing the unknown function and derivatives of it, sometimes accompanied by coefficients, but not necessarily. Usually all of these terms are gathered in one side of the equation making it equal to zero.

We usually name our unknown function as "y" due standardization of the cartesian geometric system. The function could really have any name, but it is important to know that we select "y" because of the meaning and relation of mathematical functions with the use of the cartesian coordinate system in their representation.

Continuing with the explanation on homogeneous differential equations, the unknown function y is a function in terms of x (simply put: y(x)), still, no terms of x or constants are outside of the functions for these equations, in other words, besides y, derivatives of y and constant coefficients, one cannot have any other term in the equation or it would make it a nonhomogeneous differential equation like the one show below:

The obvious difference between the two is that the right hand side of the equation is zero for homogeneous equations, while for the nonhomogeneous case is a function of x, but this is just because both equations have been organized this way, there may be cases where the equations have been rearranged differently and you need to learn how to identify each of them. The main difference is that the nonhomogeneous equation can contain independent terms involving only x or constants, while the homogeneous equation cannot. These independent terms are represented on equation 2 as function "d(x)", which is just a name we have given to say "there are terms in there containing x which are not related to the unknown y function".

While analyzing these equations notice both equations 1 and 2 are second order differential equations because both contain as its higher order derivative the second derivation of y; and last but not least, observe how these two simple examples of equations have all coefficients equal to 1, but these equations could contain coefficients equal to any number. More examples of homogeneous and non-homogeneous differential equations will be presented throughout this article in order for you to learn how to identify one or the other, but before that, let us explain coefficients.

In the last section we have mentioned how equations 1 and 2 contain coefficients all equal to 1. Let us quickly recall that coefficients are constant numbers that come before a variable in a mathematical expression, they multiply the variable and can be any number. Therefore, we rewrite equation 1 so you can see what we are talking about its coefficients all being 1:

We usually do not write coefficients equal to one because they do not change the amount of variables we have on an equation and thus, it seems repetitive and impractical. But it is important to note the coefficients are there, and we could have any numbers as coefficients  and still, they would not affect the homogeneous or nonhomogeneous status of an equation since they only express how many times the function or its derivatives are contained in the equation but do not add any other expression out of them.

Ready to see how you did?

How to solve undetermined coefficients:

Notice the name of the equation contains the words "constant coefficient" because in this case, the requirement for us to solve for undetermined coefficients is that A, B and C are any constants. The full general solution of equation 5 is in the form of:

Where it can be easily seen that we have two solutions combined: yc​(x) and yp​(x). These are what we call the complementary and particular solutions. So the method for solving the nonhomogeneous differential equation can be seen as a two part method where we first obtain the complementary solution and then the particular. The good news (and something that may be confusing at first), is that the first step usually is to simplify the nonhomogeneous equation into a homogeneous one in order to use methodology we are already familiarized with, such as repeated roots, real distinct roots, separable equations, etc, to solve for the complementary solution. Then we go ahead and find the particular solution by applying the initial conditions given in the problem.

Let us work through a first example so you can take a look into each step of the process:

Solve the given differential equation by undetermined coefficients method.

As done in past articles, we can prove this result by taking our general solution equation and obtaining its first and second derivative, then plugging these results into the initial equation and simplifying. We will do it only for this, our first example, but it is recommended that you go ahead and make the proofs of all of the problems you work through so that you can continue to develop your skills on the subject.

To summarize the complete method of undetermined coefficients, let us compile it in the next steps:

And then if you want to make sure your response is correct, go ahead and work the proof!

For this section we will be working on two examples of undetermined coefficients differential equations solutions with a little higher degree of difficulty. We will be following the list of steps summarized in the last section and what is even better, the next problems have been selected to construct a point for the next section of the article. So without further ado, let us start!

We finalize this article with the superposition approach for the undetermined coefficients method, and for that we will solve the next second order nonhomogeneous differential equation:

At first look we may think the process to solve such equation would be very complicated, but it is here where we take approach of the two examples shown in the past section to solve this equation rather efficiently.

We already know that if we simplify the left hand side of the equation into a homogeneous equation, our complementary solution would be:

Then, we need to look for the particular solution which results in the right hand side of the equation equal to:

Well this is just a composite of the right hand side of equations (a) and (b)!

And so, the superposition approach tells us that we can just combine the particular solutions which solve the equations with the given right hand side terms.

A non-homogeneous constant coefficient second order linear differential equation is of the form:
Ay′′+By′+Cy=d(x)
The complementary solution to Ay′′+By′+Cy=0 is yc​(x)=c1​f(x)+c2​g(x)

So the full general solution to

If yp​1(x) is a particular solution for 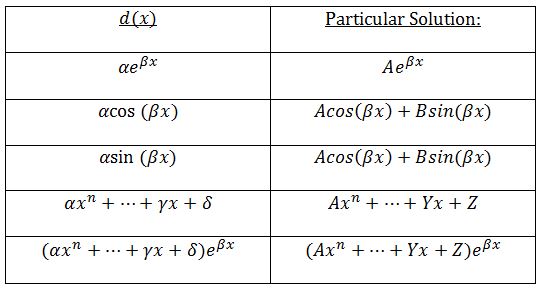