The determinant of a 2 x 2 matrix

The determinant of a 2x2 matrix

What is the determinant of a matrix

In order to define what is a determinant of a matrix we need to go back a to our definition of a matrix. Remember that we have learnt that a matrix is an ordered list of numbers put in a rectangular bracket. This list can also be called a rectangular array, and it provides an orderly fashion to display a list of information elements. If you want to review the definition of the matrix with more detail you can revisit our lesson on notation of matrices.

A matrix describes a linear transformation or linear map, which is a kind of transcription between two types of algebraic structures, such as vector fields. In that way, we can resolve systems of linear equations by representing a linear system as a matrix. The matrix representation of a linear system is made by using all of the variable coefficients found in the system, and use them as element entries to construct the rectangular array of an appropriate size augmented matrix. In such matrix, the results of each equation from the system will be placed on the right hand side of the vertical line which represents the equal sign.

You may be asking yourself, what about the definition of the determinant of a matrix then? Knowing that a matrix is an array containing the information of a linear transformation, and that this array can be conformed by the coefficients of each variable in an equation system, we can describe the function of a determinant: a determinant will scale the linear transformation from the matrix, it will allow us to obtain the inverse of the matrix (if there is one) and it will aid in the solution of systems of linear equations by producing conditions in which we can expect certain results or characteristics from the system (depending on the determinant and the type of linear system, we can know if we may expect a unique solution, more than one solution or none at all for the system).

The determinant of a matrix can be denoted simply as det A, det(A) or ∣A∣. This last notation comes from the notation we directly apply to the matrix we are obtaining the determinant of. In other words, we usually write down matrices and their determinants in a very similar way:

Equation 1: Difference between the notation of a matrix and a determinant

But notice, when we write down the matrix we have two brackets that are closed inwards, and when we are referring to the determinant of the matrix, the matrix components are surrounded by two straight lines.
We will talk more about this topic on a later lesson dedicated to the properties of determinants , still, we will introduce a few of these properties quickly today today so you can have a better idea on how to find the determinant of a 2x2 matrix and why is this important.

How to find the determinant of a matrix

How do you find the determinant of a 2x2 matrix

Its determinant is mathematically defined to be:

Which can also be written as:

Given that only the upper triangular matrix is in echelon form, which is essential when solving systems of linear equations through matrices and row operations, that is the triangular matrix which we are interested in.

It so happens that the determinant of an upper triangular matrix is the result from the multiplication of all of the elements found in its diagonal, no matter the order (size) of the matrix. Therefore, when row reducing a square matrix formed by a system of linear equations, if you arrive to an echelon form that is equal to an upper triangular matrix, you can easily compute its determinant and through that, obtain information about the kind of solutions to be expected from the system.

Determinant of a diagonal matrix

A diagonal matrix is that in which all of its elements, except those in the diagonal, are zeros.

Notice that to obtain the determinant of a triangular matrix and a diagonal matrix we can use the same simple approach. If you think about it, this comes from the fact that in a diagonal matrix, all of the components above and below the diagonal are zeros, thus if we follow the formula for the determinant of a 2x2 matrix shown in equation 3, we will see that the second term in the formula is a multiplication of two zeros giving a zero to subtract from those elements n the diagonal and thus leaving them as the only result. Something very similar happens in triangular matrices, but instead of having a multiplication of two zeros in the second term of the determinant formula, you have the multiplication of a zero and a non-zero value, which still results in zero and leaves the first multiplication as result.

Confusing? Take a look at the next equations for each of the cases mentioned:

A symmetric matrix is a square matrix which happens to be identical to its transpose, and so, what is the transpose of a matrix?

Equation 8: Obtaining the transpose of a 2x2 matrix

For the case of a third degree square matrix, the transpose can be obtained in the same way, just as seen below: 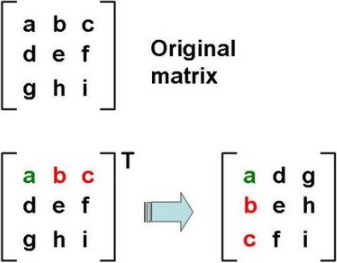 Equation 9: Obtaining the transpose of a 3x3 matrix

As you can see, if symmetric matrix means a given matrix is equal to its transpose, it also means the symmetry, which comes from respect to the diagonal of the matrices, will allow all the elements inside the matrix to remain equal. And so, the determinant of a symmetric matrix, no matter its size, is calculated using the same process as with any other square matrices, but there is a special case: all diagonal matrices are also, symmetric matrices, and so, their determinants can be calculated just by multiplying its diagonal elements.

The interesting characteristics and conditions coming from finding the determinant of a 2x2 matrix (or any other square matrix of higher order for that matter) are what we call properties of the result. Although such properties will be covered in detail in a later lesson (as mentioned earlier), let us give at least a brief explanation of them and the types of operations they are associated with in relation to the matrix.

Remember, all of the properties and rules we have seen today, although we have focused in 2x2 matrices, they do apply equally when finding the determinant of a large matrix. Also take into account all of the properties have been just briefly discussed as an introduction for this lesson, for extensive explanations on them please visit our lesson about properties of determinants, which comes later in our course.

Finding the determinant of a 2x2 matrix

Now that we have seen the general method of how to find the determinant of a 2x2 matrix and that we have seen different matrix cases and properties, is time for us to use the knowledge obtained and solve a few example exercises:

2. Given the 2x2 matrix A as shown below

Find the determinant of 2x2 matrix A:

3. Given the 2x2 matrix E as shown below

Evaluate the determinant of the matrix E:

4. Given the 2x2 matrix F as shown below

5. Given the 2x2 matrix Y as shown below

6. Given the 2x2 matrix Z as shown below

Look at the values obtained throughout all of the six exercises done above on the determinant of a 2x2 matrix, even for a small matrix of dimensions 2x2, these values are significant in finding if such matrices can, or cannot, be inverted. Our next section will be focused on this, the 2x2 invertible matrix, or in other words, how do we know if we can invert a matrix.

We hope this lesson has been useful and of your enjoyment, before we jump onto the next one let us give you a few recommendations so you can continue your studies on the topic of today. First, we recommend you to visit this brief lesson on determinants, where you will find an introduction to a higher order determinant at the end of it, and then you can take a look into this other lesson which covers both determinants and Cramer's rule. Finally, we would like to recommend this article on the the determinant of a square matrix which funnily enough, mentions at the beginning that the author has not been able to find a good English definition of what a determinant is (at least at the time he wrote the text). We hope this StudyPug lesson has been able to provide that for sure: a clear definition of the determinant of a square matrix (but if not, do not hesitate to ask!).

Well, this has been fun today, see you onto the next lesson!

The determinant of a 2 x 2 matrix